A project for the 175th birthday of one of the most important natural scientists of modern times, whose discovery of  X-rays is still a blessing for mankind today.

Our Nobel Prize winner now speaks his complete text on the discovery of X-rays in a video from his laboratory. We have slightly recolored the latter.
But that’s not all. We want more. We want Röntgen to appear much more personal in our reality. That’s why he will soon be available as an augmented reality model that you can use your smartphone to appear anywhere. More on this tomorrow on Easter Sunday.

After we have taught him how to speak and gesture in the last two days, we think about where he should stand when he talks about himself and his discovery. A photo from his working environment seems appropriate. As long as it’s a video. In augmented reality, he could be moving anywhere in real space. More on this later.  Another EXCIT3D employee, who is working on this topic, doesn’t want to reveal too much yet.

After a long night from yesterday to today we are now almost finished with the animation of the spoken sentences this evening. He’s already doing something! But in order to reanimate the whole person, we now devote ourselves to the rest of the body. In the next steps we will also design the movement of the hands and the body for the facial expressions.

The focus is now on the design of the textures and the colors (see figure above). In addition, we start with the synchronization of the lips (lip sync) and facial expressions to the spoken text.

DAY 7 – Not only the head, the whole body is animated 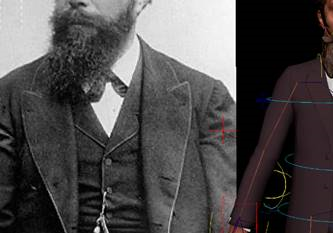 Everyone involved is now so fascinated by this project that we have decided not only to animate the head as originally planned, but to create the complete human being virtually. With the support of the Deutsches Röntgen Museum and through research in books, publications and the Internet, we have again tried to understand the clothing style of Wilhelm Conrad Röntgen – and we would like to implement this accordingly!

The picture above is the basis for our animation.

We do not only intend to realize a movement of the face. Of course, Mr. Roentgen is to speak as well. We didn’t have to think too long about what important scene in his life was to be depicted. The most important, most exciting and probably also most frightening moment in his life was the discovery of the new rays.

Together with Dr. Uwe Busch from the Deutsches Röntgen Museum, we developed a monologue that our protagonist could have spoken in a similar way at the time.

We won our favourite for such cases:

His distinctive voice, well-known from German TV , was the ideal cast for all project participants.

First of all, our 3D artist prepares the base mesh.

We retain the shape of the scanned head or face.
Now we proceed to create a new geometry of the head, hair and beard, with a precise, animatable topology. 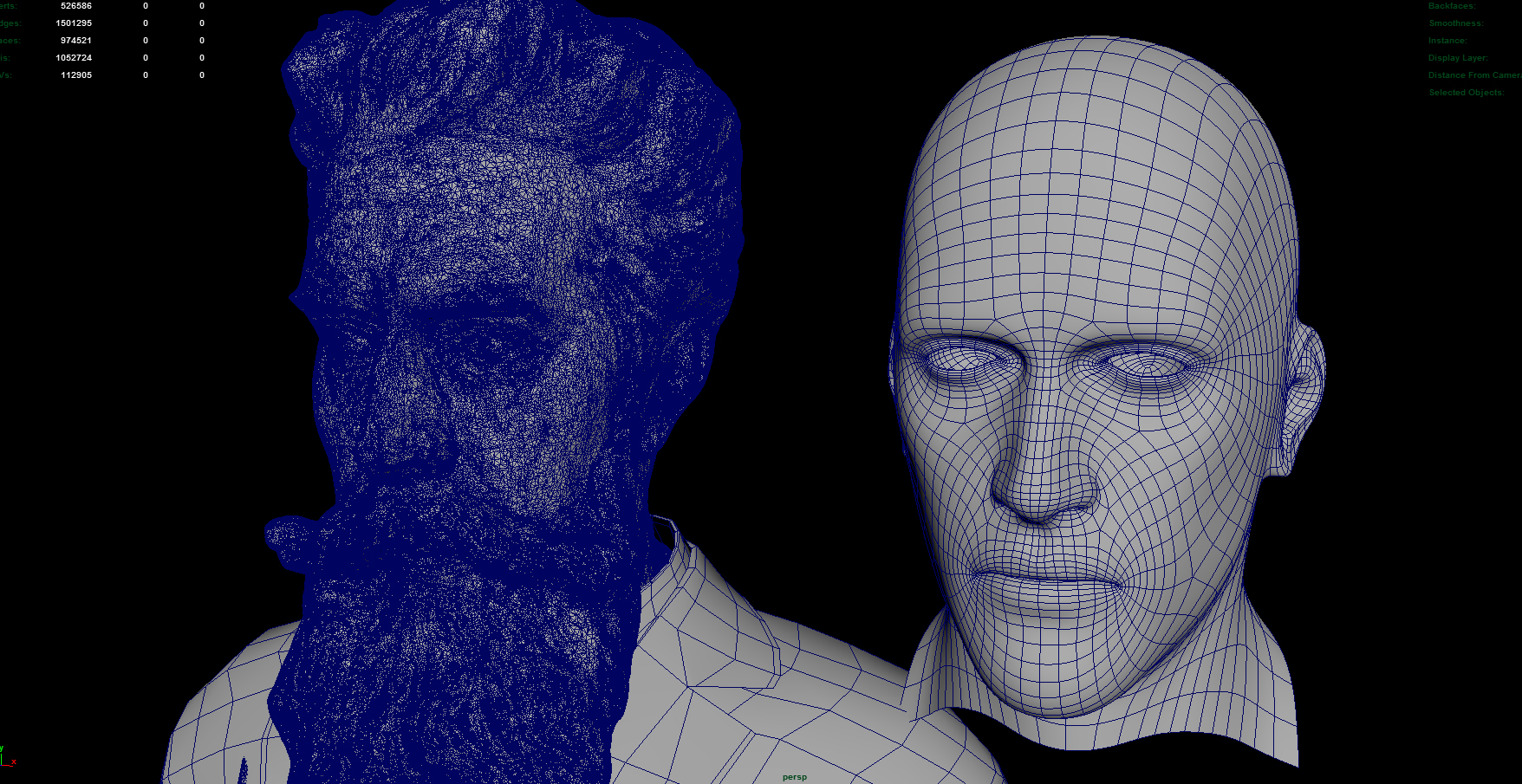 No April fool’s trick: The processed scan data from Klostermann Ingenieurbüro und Vertriebsgesellschaft mbH are of the highest quality.

We have already set to work.

First we import the data into our 3D modelling program.

An additional motivation for our team is the report in the economic supplement of the Remscheider Generalanzeiger on our #röntgenlebt / #ronetgenlebt – project. 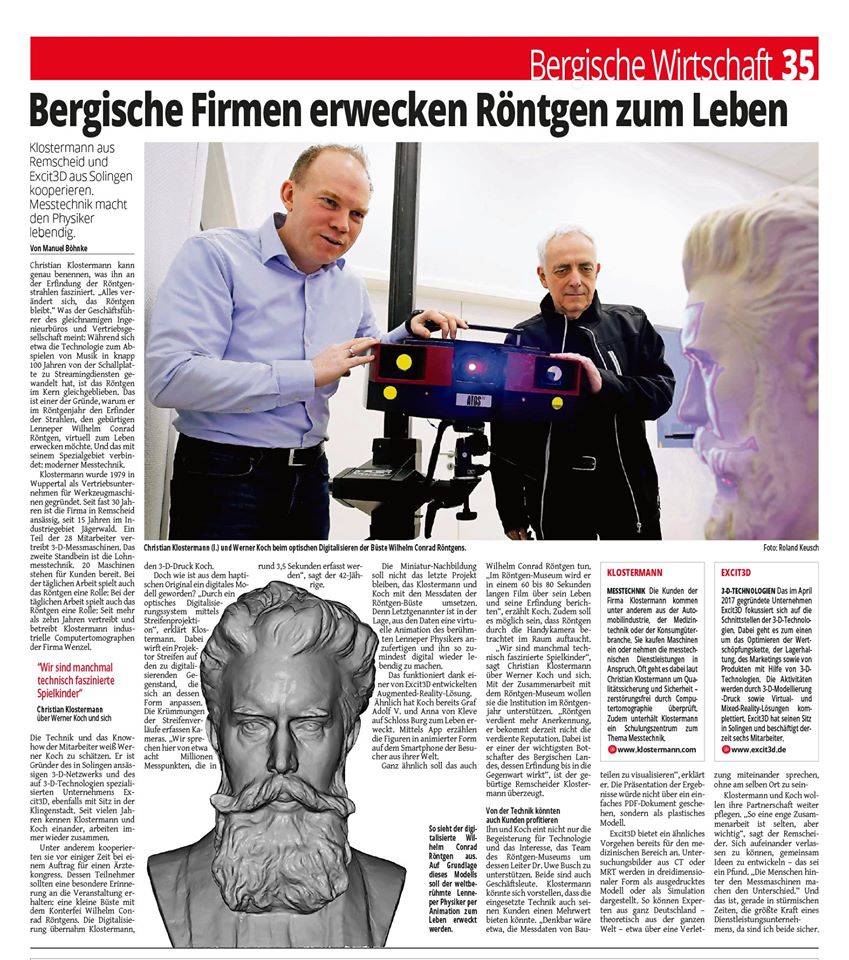 15,345,459 measuring points | Every point counts – because only then can every detail be accurately reproduced.

Quite a lot of work:
15 million measuring points, each of which has an X, Y and Z coordinate, were recorded here.
With only a few steps and scan settings. After the data acquisition on the bust, the processing of the scan data starts.

In the cloud of points there are some few “outliers” that can be automatically deleted by the software.
In the next step, the point cloud of millions of measuring data has to be “thinned out” and smoothed.
This is also done in the measurement software with a few clicks. The output size of the scan data of more than 800 MegaByte could thus be reduced to nearly 90 MB.

So the first part is done – and we transmit the processed scan data to our partner EXCIT3D GmbH – and are already very excited about the next steps!

Point cloud | Everything begins with something very small: In our case, the smallest pixel is 8 thousandths of a millimeter small; about the size of a human hair.

For the first time we were allowed to exclusively digitalize the official bust of Wilhelm Conrad Röntgen (created by the artist Reinhold Felderhoff), which is located in the Röntgen-Gymnasium Remscheid-Lennep Remscheid, by means of fringe projection.

Since the original colour of the bust was quite dark and also reflects unfavourably, the bust was frosted white with a chalk spray to create a light and homogeneous surface. For the best scan quality!

We used our 3D digitizing system ATOS III TripleScan with a resolution of 8 megapixels. This strip light scanner “photographs” the bust from different sides and creates a 3D point cloud of millions of measuring points from these individual images.
Therewith it is guaranteed that even the smallest contours (as for example the beard or the eye area) can be imaged with high precision.

Be there when we bring Roentgen back to life!
In the Röntgen double anniversary year (125 years of the discovery of X-rays and 175 years of the birth of Wilhelm Conrad Röntgen) we will bring Wilhelm Conrad Röntgen to life together with our partner EXCIT3D GmbH from Solingen and with the support of the German Röntgen Museum in Remscheid!
We will show you the possibilities of capturing contours and faces with 3D scanning systems, the preparation of scan data, the texturing (color enhancement) of scan data, up to the lifelike animation of the world-famous scientist.
The goal at the end is to make the most important moment, the discovery of the X-rays named after him, in the year 2020 per Augmented Reality for all to experience.